Shion Watanabe (渡辺 しおん Watanabe Shion) is a high school student that attends the same school as Mari Inuyashiki, Naoyuki Ando and Hiro Shishigami where she has a crush on Hiro and they later develop a romantic relationship.

Shion is a fair-skinned young girl with short curly hair and hazel eyes.

She is often seen wearing her school uniform, but also her outdoor clothes.

Shion is a kind, quiet and keeps to herself at school, interacting to a select few girls that go unnoticed because of being unattractive and unpopular, as does she.

She is quite compassionate about Hiro and persists to believe in his innocence and good nature even though he shows signs of sociopathic behaviour. She develops feelings for Hiro Shishigami when he defends Ando against bullies falsely trusting him to be empathic, but later realizing the irony in her decisions and disassociating with Hiro while still having deep feelings for him.

Shion talks to Hiro Shishigami and confesses after she witnesses him save Naoyuki Ando. Eventually, after Hiro flees from the police, she picks him up and lets him live with her and her grandma while refusing to believe he is a murderer.

She eventually finds out he is the murderer, but somehow manages to convince him to become a good person. This lasts for a while, before the SWAT Team shoots her and her grandma, leaving them gravely wounded. Though, they reappear just fine with them noticing that Hiro leaves money in their bank account. 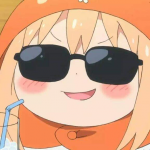